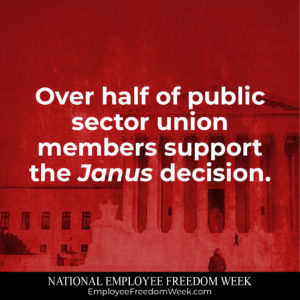 Recently, the U.S. Supreme Court ruled that government workers cannot be forced to pay fees to a labor union. Many experts described this ruling as the most significant court decision affecting collective bargaining rights in decades.

To better understand how state government employees view this ruling, and whether they plan to continue or stop paying dues, a national survey of over 300 public-sector union members was administered in August 2018.

One public sector worker who participated in the survey said the following: “If the union is not supporting or representing the worker, then he or she should not be required to pay money for unfair treatment.” Another survey participant put it this way: “The union does not represent me. I think we should vote with our money, and if a union doesn’t do its job, it shouldn’t get paid by me.”

The findings reveal some interesting and important insights about public sector union members:

A Comparison of Members’ Opinions of Union Performance, Management and Practices As the union landscape continues to shift — with membership rates declining, increasing adoption of Right-to-Work laws, and other changes — it is unclear whether employees working in non-Right-to-Work states actually fare better than their Right-to-Work counterparts. According to the 2017 survey results, the answer is…

For National Employee Freedom Week, 2016, union members were asked two questions about employee freedom. In addition to asking if union members would like to opt-out of their union, NEFW also looked at the support for “Workers Choice” reforms, which would allow employees who opt out to negotiate directly with their employer. Question 1: If it…